Furinkan High School is a co-ed high school in Furinkan that is attended by Akane Tendo, Ranma Saotome, Tatewaki Kuno, and Nabiki Tendo. The school is one of the most commonly seen locations in the series. It is run by Principal Kuno and Hinako Ninomiya teaches English here.

Shortly after arriving in Furinkan, Ranma was enrolled here. On his first day he managed to earn both the rivalry of Tatewaki Kuno in his male form and conversely his love in his female form. Akane used to have to fight a horde of male students who were pursuing her every morning until they recognized her engagement to Ranma and gave up on her. Ukyo Kuonji later became a student here after arriving in Furinkan. Other characters seeking Ranma such as Ryoga Hibiki and Shampoo tend to drop by Furinkan during the day because he can be found here. The school is also a favorite target of Happosai for his underwear raids.

Furinkan's dress code consists of a white shirt that comes in both short and long sleeved versions for the girls, which is paired with a light colored dress (aquamarine in the anime) over which they wear a matching open jacket during the colder months. The boys wear the gakuran, which consists of a dark, long sleeved short collared jacket and matching pants with a white collared shirt. Similar to the girls, they do not wear the jacket during the warmer times of the year. Regardless, the dress code is either not enforced or voluntary as three of the characters do not adhere to it. Ranma wears his Chinese outfit and has never worn the uniform. Although shown wearing the uniform briefly in the manga,[1] Kuno typically wears his uwagi and hakama instead. Ukyo wears the gakuran from her former school, which is a medium color.

The school's main building features a central clock tower and is where classes are held. The following athletic facilities are located outside:

*Gym: In the manga, this was where Hikaru Gosunkugi lured Ranma and Akane into a trap after he had gathered a horde of cats and a tiger in the gym's basement. It is also where Ranma defeated Hinako. 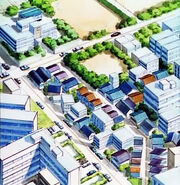 A classroom in Furinkan High.

The entrance to the High School, shortly after one of Akane's fights.

Akane in her classroom.

Akane and the gang at Furinkan