The Saotomes and Tendos head to the beach once again and Ranma receives a letter of challenge from Kuno. Kuno washes up on the shore in front of Ranma with a watermelon on his head. Kuno does not recognize Ranma or anyone else for that matter. It seems that he has amnesia.

While enjoying themselves at the beach, Nabiki asks Akane she knows where Ranma ran off to. Akane walks over and explains that Ranma's gone fighting again as Kuno's issued him with another challenge letter.

Meanwhile, Ranma waits for Kuno to arrive, but is growing impatient with how long Kuno's taking to appear. As he looks out to the ocean, Ranma recalls Kuno's challenge letter in which Kuno informed Ranma that he'd soon taste the fruits of his new training. Suddenly a man with a Watermelon on his head emerges from the water, terrifying Ranma, however, the man quickly collapses which causes his Watermelon to break and reveal that the man is actually Kuno.

After bringing the unconscious Kuno back to their hotel room, Kasumi wonders what sort of training Kuno could've, while Ranma bluntly comments how much trouble Kuno is. Just then Kuno awakes and Akane wastes no time in asking him is he's all right. After sitting up and scratching his head, Kuno grabs Akane's hands before carrying her away whilst declaring that they shall start a new story of love.

Fortunately Ranma and Akane hit Kuno before he can run off, but Kuno oddly responds by asking Ranma what right he has to act so barbarically towards him. After calling Kuno an idiot, Ranma reminds him that he (Kuno) was the one who sent him a challenge letter, however, no matter how hard Kuno thinks, he can't recall the challenge or even his name.

A little while later and Kasumi wonders if Kuno has amnesia. Ranma asks Kuno if he remembers him, but Kuno has no relocation. Akane then decides to douse Ranma with cold water to see if that jogs Kuno's memory. Despite Ranma's scepticism, Kuno reacts to the appearance of the female Ranma and eventually recalls false memories of her timidly approaching him with a love letter; giving him chocolate on Valentine's day and how they spend their first Sunday date at an amusement park.

Kuno continues by claiming he remembers their first kiss, but Ranma hits him whilst asking how he can have such clear memories of things that never happened. This concerns Kasumi, who worries that the amnesia might've altered his memories more than they thought, although Akane informs her that Kuno's pretty much always been like this.

The next day, the group go out to the beach again, where Nabiki questions Kuno if he really doesn't recall being classmates. Nabiki then continues to ask Kuno if he remembers the 5,000¥ he owes her. Kuno instantly tells her that he can at least fix that and hands over the money. As Kuno goes off to think, Kasumi tells her younger sister that Kuno already has amnesia and didn't need to swindle him out of 5,000¥. Nabiki agrees with her sister, as she should've made it 10,000¥ instead!

Kuno, meanwhile, looks at his Bokken and wonders what he needs it for as well as who he is. Just then Ranma throws a watermelon near Kuno, surprising him, before explaining about he found Kuno with a watermelon on his head, so might be able to help jog his memory. Kuno immediately demands that they keep the watermelons away from him. As Kuno flees, Ranma and Akane give chase, but Ranma trips up and sends the large number of watermelons from the cart he's pulling flying towards Kuno.

After screaming in terror as the watermelons close in, Kuno begins spinning rapidly whilst using his Bokken to repel the watermelons. However, Kuno's technique soon seems to be getting out of hand, prompting Nabiki and Akane to demand Ranma goes in to try and stop Kuno. Ranma swiftly moves in to kick Kuno, but he turns around and a bright light engulfs Ranma.

When the light dulls, Ranma lands on the floor, relatively unharmed but with slightly tattered clothing. Ranma is shocked at how he never got chance to get close to Kuno while Akane thinks about how Kuno's become a formidable fighter (Soun and Genma, meanwhile, are more preoccupied with how the watermelons have been cut into perfect slices). Just then Kuno panics at not knowing what's going on and he falls of his knees whilst holding his head in pain. This prompts Soun to comment that learning such a powerful technique must've required great mental strain, before adding that Kuno must've lost his memories from such strain.

With Soun's words echoing in his mind, Ranma walks over to Kuno and tells him that doesn't need to give himself amnesia just to defeat him... At that moment a wave rolls in, turning Ranma into his female form. Kuno then proceeds to look before declaring that he must've done it for her sake and begins to hug Ranma intensely (much to her discomfort).

As Ranma desperately tries to get Kuno off her, Akane looks on and comments that, when you think about it, nothing's really changed.

Cast in Order of Appearance 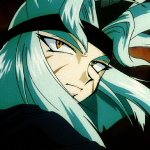