The Ranma ½: Live Action Special is a special two-hour live action episode which includes an original story not from either the anime or manga that aired on Friday, December 9th 2011 at 7:00 p.m.[1] as part of NTV's "Friday Super Prime timeslot" that was first revealed on September 26th 2011, with the first trailer commercials airing on November 23rd.[2][3][4][5]

Yohihiro Izumi scripted this first live-action version of the series after having written the live-action television and film versions of the Rookies baseball manga. Takahashi herself said that she was surprised at first when she heard about the live-action adaptation — but with the interesting story scenario and all-star lineup, she added that she now thinks it is very amusing.[3] The opening theme for the special is called "Chikutaku☆2NITE" and is sung by all the female group, 9nine.[6]

As the third daughter of the Tendō family, Akane is determined to protect the family's legacy, its dōjō. However, her father Soun suddenly and arbitrarily announced one day that "only men can be heirs." Unfortunately, this puts Ranma in a bind, since he turns female when splashed with cold water after falling into a cursed hot spring in China. To return himself to a "full man," Ranma searches for the "secret hot spring" and gets caught up in a battle with a mysterious enemy. Now Akane holds the key to the story.[3] 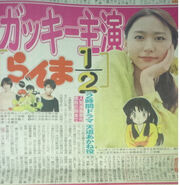 The original newspaper article which reveals the Special.

The first image of the cast in costume.

On set stunt coordinator talks to Yui Aragaki before filming.

The logo for the Special.

A special sketch Rumiko Takahashi did based on the live action promotion.

Madam Kamanbell, the villain of the special.