The game features an original story in three parts. In Part 1, Principal Kuno sponsors a contest in which the prize is a trip for two to China. In Part 2, Ranma Saotome, Akane Tendo, and Tsubasa Kurenai go to a beach enclosed within a dome, during which Ranma gets kidnapped. Part 3 sees Akane stumble onto the lair of the villain who had Ranma kidnapped, an anthropomorphic white bear named Sanpakute, and Ranma regain his freedom.

The game is a digital comic which involves the player, acting as Ranma for most of the game, selecting from a series of choices, such as what to do or say to someone. There are several fights in the game which are also menu-driven. It is not actually possible for the player to lose a fight, as it will continue until the right actions are performed and the player wins.[1]

At the Tendo Dojo, Ranma’s reluctance to get out of bed gets him splashed with water by Genma. When Ranma and Akane get to school they find a short man with glasses standing on the gate, who gives Akane a flyer. Principal Kuno announces that he is holding a contest in which the prize is a trip for two to China. Tatewaki Kuno is looking forward to taking the pigtailed girl and gets the tickets, but then Kodachi appears to grab them and tries to take Ranma with her. However the tickets then spontaneously combust, and the principal informs everyone that they will have to actually compete to get them. On his way home, Ranma comes across Cologne, who tells him to talk to Happosai. The old master is not at the Tendo Dojo so he goes back to the Cat Café, where he finds P-chan and turns him back to normal. Shampoo then throws some water that hits Ranma and is happy to see him. Inside Ranma talks to Cologne. Against her great-grandmother’s wishes, Shampoo takes a pouch from her and gives it to Ranma, although he will have to take her if he wins. Ryoga sees this and learns about the contest. Ranma returns home and reads a note in the pouch. Cologne then appears and Ranma learns that he will actually have to compete in the contest.

At school Akane and Ranma head to the competition area, where they find the Kuno siblings, Ryoga, and Tsubasa Kurenai. With the contestants each at a desk inside a ring, the principal asks the first question. However Ranma and Shampoo get sprayed with a fire hose when they try to answer and Ranma is incapacitated, so no one gets it right. She revives for the second question and returns to normal form. Shampoo is also returned to normal. Kuno and Ranma get into a fight, during which Ranma douses himself, then changes back. With Kodachi’s help he takes Kuno out, but then they both fall into a pit while trying to answer the question, so again no one gets it right. During the third question, Ryoga tries to run forward with the answer, but gets lost and ends up running off. Ranma grabs Tsubasa, who has disguised himself as a giant firecracker to run forward with the answer, but they are both hit by a coconut missile fired by Principal Kuno, so no one gets the question again. The principal thus announces that no one has won the tickets so he tears them up, provoking the contestants' wrath and they beat up on him.

Ranma, Akane and Tsubasa go to the beach, where they find a section of ocean covered by a long dome connected to a building. Akane and Tsubasa decide to try this out and after transforming, female Ranma follows them. Shampoo happens to be working at the beach selling accessories and Ranma procures a bikini from her. While she surfs, the short man from earlier spies on Akane and Ranma and communicates with a mysterious figure who is watching the footage he is recording from a series of monitor screens. A shark appears which Ranma defeats. While she is swimming back to the beach, a helicopter piloted by the little man appears and deploys a robotic hand which grabs Ranma out of the water. The helicopter breaks out of the dome enclosing the beach and flies off. Tsubasa tries to go for Akane but she breaks his watermelon disguise. Akane and Shampoo are forced to team up to fight Cologne before she tells him about who kidnapped Ranma, Sanpakute. Akane recalls that the flyer she had picked up at the school gate had Sanpakute's name on it. Cologne mentions that Sanpakute has access to a mythical white flower, the nectar of which can lock Ranma in his female form and allow Sanpakute to marry her. Akane and Shampoo then go off to search for Ranma in the mountains.

Female Ranma awakens in a room wearing a Chinese wedding gown and is greeted by a man in a cat mask and long wig. She is shown a table laden with food and the two get into an eating contest, which Ranma wins by using the Parlay du Foie Gras. The masked man is knocked out and is revealed to be a monkey. Ranma returns to his male form and tries to escape, but falls into a trapdoor, landing in a pond. The pond is outside a tea house, where a man wearing a dog mask is waiting. After fighting him with Martial Arts Tea Ceremony techniques, Ranma uses the hot water to return to normal. He throws the pot at the man, breaking his mask, revealing him to be Mousse and the fight continues. Mousse gets splashed with water and knocked out. Genma then appears and reveals that he is working with Sanpakute before fleeing through a hidden passage. While trying to figure out how to escape, Ranma notices that the spilled water from his fight with Mousse seems to be draining into the tatami and uncovers an air duct, which he enters. He ends up in a subterranean level where he is knocked unconscious by Happosai.

Akane and Shampoo continue to search the snow-covered mountains. They run into Ryoga, who had run off earlier and is wandering the area. There is an earthquake which triggers an avalanche. Akane cannot ski away and Ryoga falls on top of her to protect her. Shampoo escapes by clinging to a tree branch. However the avalanche pours into a hidden pit which opens in the ground. Akane and Ryoga find themselves inside the subterranean area Ranma was in. Akane finds a hair and recognizes it as Ranma’s, mistaking Ryoga's offer to help as that of a friend.

Meanwhile Ranma is shown in female form wearing a wedding gown again and knocked out, while Genma and the little man, Chashu, are eating. Sanpakute puts a veil on Ranma and rewards Happosai with a pile of lingerie and four scantily clad women to play with. Akane finds Sanpakute's monitor console and activates the monitors, seeing a captive Ranma. She then finds Ryoga. Back in Sanpakute’s chamber Chashu brings him the white flower and he takes it to have Ranma drink its nectar, but before he can do so Ryoga and Akane break in. However Ryoga gets splashed with water and taken out. Akane battles Happosai, during which Ranma awakes. She sees an incapacitated Mousse and Ryoga, with a stuffed Genma and Akane holding Happosai off. Sanpakute appears with the flower, but Ranma breaks the chains holding her back and battles him, alternating fighting him in both forms. Finally she rips out a column and throws it at him. The bear dodges and the column breaks the floor, unleashing a geyser of hot water from below that destroys the palace. Everyone is able to escape, although Ranma and Akane end up separated from the others. Despite the cold, Ranma strips off his gown and puts it on Akane. She notices the flower had lodged in the veil and gives it to Ranma, but it dissolves. He then tries to tell Akane that she looks cute, but Shampoo skis in, snatches him away and kisses him, to Akane’s frustration. 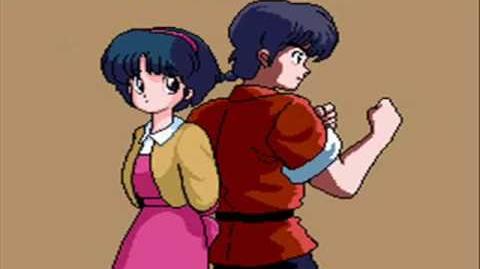