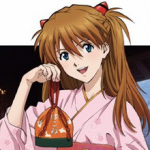 I have been a fan of Ranma ½ since about the late 1990s. To give you some perspective of how the scene was back then, Viz Communications (now Viz Media) originally published the manga in comic book form before republishing it in graphic novel format. When the manga ended I was able to get the Japanese versions of Volume 37 and 38 (although 38 was a reissue) so I could see the final story arc and ending. As for the anime, the VHS tapes had 2 prices: $30 for the dubs and $35 for the subs, and each tape had about 2 episodes. I haven't seen somewhere around Season 3 (Hard Battle) of the TV series and beyond but have seen the OVAs and movies. The first movie was actually the first piece of Ranma anime I ever watched and although the opening confused the hell out of me at first, I ended up watching the whole thing several times.

Ranma ½ is no longer my favorite anime, but it is in my top 3 along with Neon Genesis Evangelion and the Macross franchise (not Robotech).

As far as my Wikia activities go, I am the founder of the Battle Angel Alita Wiki and have adopted the Monster Blood Tattoo Wiki.

Opinions on various aspects of the series

Favorite character: None in particular

Sub vs. Dub: I personally prefer the sub since I do not like how the first male Ranma's English voice (Sarah Strange) was done, and it is the only dub voice for the series that I dislike.

Favorite season: At this point the first one. It is the closest to the manga, covers a good story arc, and in my opinion the animation quality was also the best. By comparison the later seasons don't look as polished.

Favorite OVA (s): The adoption of the Shinnosuke Arc (Reawakening Memories) and the original story The One to Carry On.

Favorite movie (s): Nihao, My Concubine and Team Ranma vs. the Legendary Phoenix

The live action: I think a decent job was done with the live action adaptation. The actors were able to capture the spirit of the original characters, and the bonus for longtime fans of the series is recognizing where the references to the source material are. As things end there will probably not be a follow up. It was a bit of a stretch having Genma transform into a suited version of his cursed form, but worked, and it would be difficult to translate this over to Ryoga or Shampoo.

Retrieved from "https://ranma.fandom.com/wiki/User:BrokenSphere?oldid=16411"
Community content is available under CC-BY-SA unless otherwise noted.