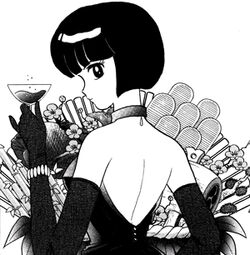 Nabiki has been stated to not possess any 'maidenly feelings', or 'be completely heartless' in the initial author notes of the Kasha-Oh story-arc, depending on the translation.[1] She has used her classy and attractive appearance to fleece and swindle any potential suitors for all they are worth, conning them into giving her expensive food, clothes and jewellery. At the point she's gauged that they've reached their financial limit, she immediately breaks up the relationship and blackmails them to pay her additional money afterwards by threatening to distribute their love-letters.[2] Nabiki is very good at faking amorous emotions to fit her needs. She thinks it's amusing to repeatedly manipulate and abuse Ranma's feelings with sadistic play-acting.[3] An (unsuccessful) rival swindler may have been another victim of this deception.[4]

In the anime Nabiki and Kuno have been implied as a potential couple in the episode "Extra, Extra Read All About IT! Kuno and Nabiki!" where Kuno was told by a famous fortune teller named Gendo, on the basis of a fire reading that had been unintentionally sabotaged by Sasuke, that she was the love of his life. He started trying to forget about Akane and the pigtailed girl. Nabiki was amused by his affection, but didn't take him too seriously. When the fortune teller explained his mistake, Kuno stopped trying to force himself to love her (although he had already angered Nabiki, Akane and Ranma by declaring to the school that he would wed Nabiki and keep the other two girls as his mistresses after girl Ranma accused him of abandoning her).

Another implication sign of love was in the second movie where he attempted to save Nabiki but ended up needing her help, and in the OAV this was seen more often, such as in the OAV Oh, Cursed Tunnel of Lost Love! Let My Love Be Forever, Nabiki and Kuno managed to go through the cave without getting separated.

The manga also has a gag about the two in 'The Umbrella of Love!' story, when the two fell under the titular magic umbrella. Nabiki asked for 1000 Yen as proof his love and tearfully stated she'd treasure the money for the rest of her life, once the umbrella was removed Kuno was in shock, whilst Nabiki is annoyed she didn't ask for more money when under the magic umbrella.

I start to read Ranma ½ manga when I was high school student. I am huge fan of Inuyasha, Rin-ne and MAO. I also own Ranma ½ Volumes 1-36 (first edition) and Box Set DVD, Movies (Remaster from 2016).

Welcome to My User Page!
Hello! I'm one of this wiki's admins, Kitsunes97
You can call me Kitsune. This are the other wiki's I work and manage (I'm admin/bureaucrat), and that I am active in ~
Community content is available under CC-BY-SA unless otherwise noted.
Advertisement
Follow on IG Newsletter Join Fan Lab